The Flipper Zero is amazing. It has an amazing capability set that is growing weekly, and is a great entry-level (Or perhaps not even entry-level depending on how hardcore you get) tool for exploring signals, networks, and computing. Kissing the ring aside, the addition of U2F capabilities feels like a mixed bag for a few key reasons. To get there though I’m going to have to create the universe first. To start…

I am certain I am going to miss a bunch of little things here around FIDO, U2F, authentication and authorization, best practices, and the larger context. I’m going to do my best, but I’m fallible. You know where to find me if I mess up, I’m but an email away.

That said there’s a bunch of points that need to be discussed to get us to why U2F on the Flipper Zero is a mixed bag.

Where we’re going to go on this journey to be an old man yelling at a cloud is as follows:

And with that we’re out of the gate, let’s go.

Honestly I was going to type up a whole mess of terms here you should vaguely understand. Instead, I’m going to throw the The IDPro Terminology Reference at you and hope something sticks. I use other terms here outside of that, and DuckDuckGo will probably be your friend. Stay strong.

Okay so what is FIDO?#

FIDO, or the Fast Identity Online Alliance, is an industry group that contains a whole mess of companies. As a group they at least pretend to care about securing the authentication process. The general idea is to use public key cryptography to support authentication processes, as opposed to a username or password. This same pattern has been used in US government operations for a long time with Common Access Cards and Personal Identity Verification as well as other high-security environments, but FIDO’s goal is to bring this pattern to common folks. I don’t want to dive in too deep here on established design patterns but there are basically two ways forward here- software-driven and hardware-driven. Software-driven examples are Passkeys , while hardware-driven examples might be a Yubikey. Each of these might work across different protocols within what FIDO has built (For instance a software passkey won’t work under old specs), and I won’t get into the range of specs FIDO has built, except one. U2F.

U2F stands for “Universal Second Factor”, where the factors of authentication are typically “What you have” (In this case the U2F device) and “What you know” (Typically a password/PIN), so for the sake of discussion we’ll pretend that is the case moving forward. The flow for using U2F is pretty straightforward.

Makerdiary created the following flow, which is pretty spot on: 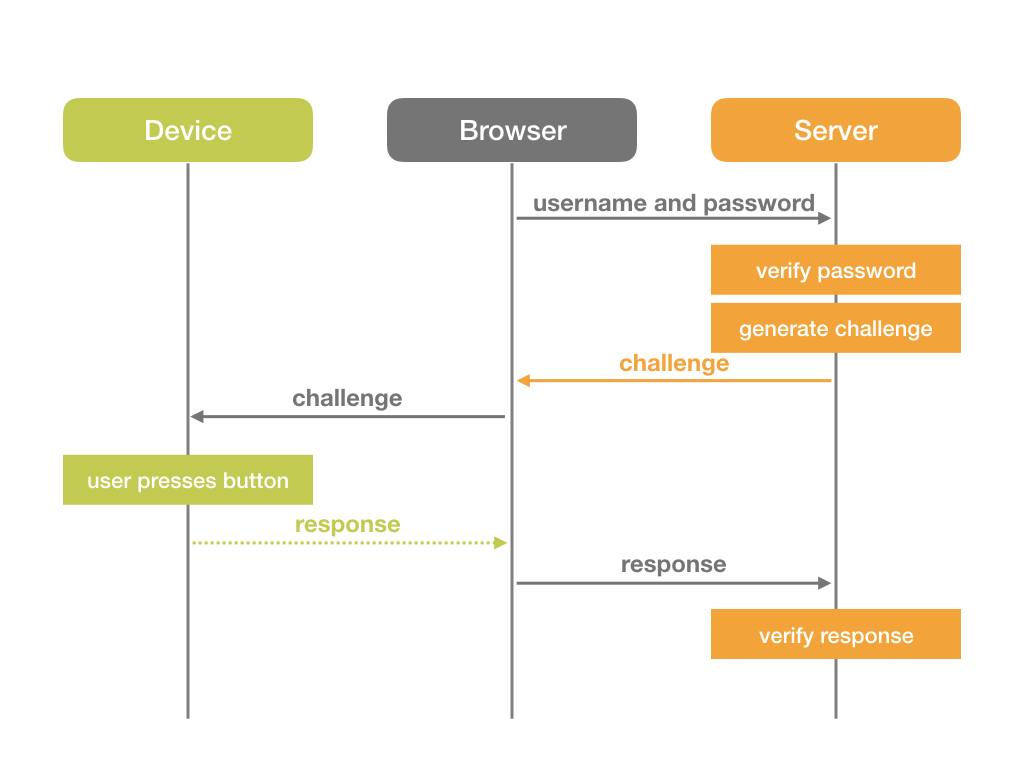 Some things to note about U2F that aren’t really talked about:

Anyway the full spec can be found on the FIDO alliance website if you decide you hate yourself.

What Does This Mean for Yubikeys?#

To many, Yubikeys are considered the gold standard of U2F / FIDO physical keys. Let’s talk about why without getting too friendly with them, because they have absolutely have their issues and detractors.

I didn’t Know you Were a Yubico Salesman, now Tell me About the Flipper’s U2F#

Okay so let’s compare the Yubikey against the Flipper.

Obviously the Flipper Zero is going to require battery power to do what it needs to do. This isn’t a downside; the Flipper Zero isn’t built to be an end-all be-all hardware token, by plugging it in to do U2F you can get it powered. Speaking to cost, the Flipper Zero is weirdly not too much more expensive than a CAC card. The Flipper Zero doesn’t currently support U2F over NFC, but to be fair here it could in time. That leaves us with two real places to go to then- physical access to the guts, and then what we can do with the guts afterwards.

Ripping into the Flipper is easy (RU Link, translate if you want). Aside from that there are U2F available over the SD Card that could be exfiltrated. So what does this look like? Well… The file structure for the Flipper looks something like this. As we can see in the example:

We’re left with four real files to worry about. These files are all listed as specific and separate filetypes, E.G… 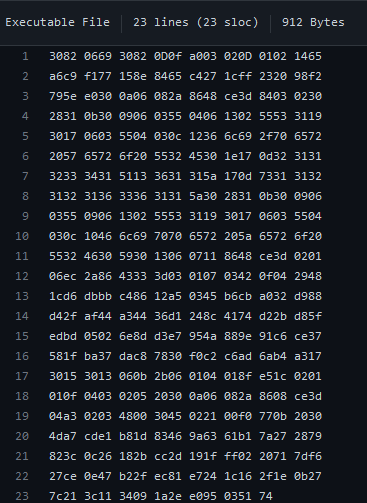 These files, while they look unencrypted are (thankfully) ultimately generated on first time setup of the Flipper and are encrypted by a device unique AES-256 key (32 bytes) that is stored in the Flipper Zero’s STM32WB55RG (In the secure enclave, the flash memory on the MCU). Which, fair! If we look back at the way U2F is supposed to manage certs and encryption this is a fair take- we are decrypting relevant U2F information at runtime and processing accordingly.

As a quick aside on AES… AES is a block cipher, and by the nature of being an encryption method you can both encrypt and decrypt a message- it is not one-way like a hash. It generally relies on a key, an IV (Initialization Vector), a mode (The algo used to encrypt within AES), and some input. This input is padded when necessary (Because block cipher) in order to cleanly perform encryption. A great overview on AES can be found here. If you know all of these components it’s trivial to encrypt and decrypt- if you have some time you can play around with this on CyberChef.

I say all of that to say that it’s crucial to understand the key becomes the linchpin of encryption; without protecting the key, the encryption isn’t much better than a glorified encoding scheme. A great deal of effort across both private and public sector goes into how to properly manage private keys and other such secrets.

What this means is if we have physical access to the Flipper Zero, we can attack the STM32 through a number of ways to get a hold of that AES-256 private key; reverse engineering among them. Indeed from the Flipper Zero Discord that I feel encapsulates the core issue here:

Does This Even Matter?#

We need to understand that concepts like “Tamper resistance”, the strength of a given chip’s secure enclave, and so on matter to an extremely small degree for a vast majority of consumers. The average person looking to make access to their bank accounts more secure aren’t going to need to worry about a threat actor taking their unguarded Flipper Zero, disassembling it, getting at the STM32 chip, and so on. The average person isn’t being persued by antagonists that have nation-state capabilities, or even advanced capabilities. These concerns are absolutely valid and we should build capabilities that are sound from a security perspective, but they don’t speak to the reality of the masses.

Consider that many, many, many more data compromises are caused by human failures than technological ones, by and large because humans are easy to exploit whereas relatively secure systems are not. This isn’t to disregard aiming for best practices, but we must not let perfect get in the way of good. If the Flipper Zero exposes people new to security to U2F (Or FIDO2, which the Flipper Zero team is looking to implement), that is a beautiful thing and we should encourage that.

Also consider that with the advent of FIDO2, WebAuthn, and CTAP that U2F is being deprecated, with some browsers and authentication services already doing so in favor of WebAuthn. U2F is dying the slow death of all authentication mechanisms, continually supplanted. Maybe one day we’ll get it right.

Yubico has a great site that you can use to play around with U2F, and I would be remiss not to mention it here.